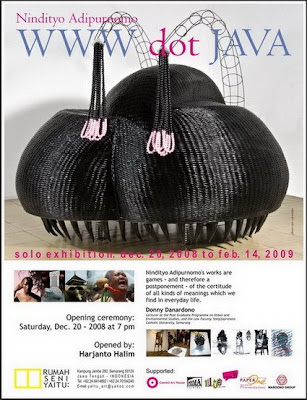 Solo Exhibition:
�WWW dot JAVA�
By Nindityo Adipurnomo
Opening:
Saturday, 20 December 2008; 07.00 PM
Opened by:
Harjanto Halim (cultural activist, Semarang)
Exhibition:
21 December 2008 – 14 February 2008
Opening time: everyday except holidays10.00 AM �17.00 PM
For Nindityo Adipurnomo this solo exhibition at the Rumah Seni Yaitu is a kind of homecoming. He was born and attended high school in Semarang. Nindityo, and his wife Mella Jaarsma who is also an artist, is widely known as founders of Cemeti Art House, Yogyakarta, 20 years ago.

His interest is mainly on the visualization and the cultural background of the �konde�(buns) � the various hair arrangements in the feminine beauty tradition, especially in Java and Bali. His observation is based on the (temporary) believe that there are many contents � political, cultural, religious, economic, and even gender issues (feminism as well as patriarchism) – put into buns.

Nindityo is obsessed with the ambiguity of texts, which do not have finite endings. According to Donny Danardono (lecturer at PMLP and the Faculty of Law Soegijapranata Catholic University):�Nindityo Adipurnomo�s paintings and installation works makes fun on the certainty of texts. Being playful, they certainly do not make any claim of presenting a certain truth, let�s say an emancipating truth. In short, his works are games � and therefore a postponement � of the certitude of all kinds of meanings which we find in everyday life.�

In his solo exhibition � �WWW dot JAVA� � his first in Semarang, Nindityo Adipurnomo (born in 1961) will present three installation works, three object d�art, three photographic works and three paintings. All flow into the mainstreams of culture and religion in their various visualization forms.

During the exhibition some side events such as lectures, discussions, and public education programmes involving the art community, students and the general public will be held.
The exhibition and related events are open for the public, free of charge.