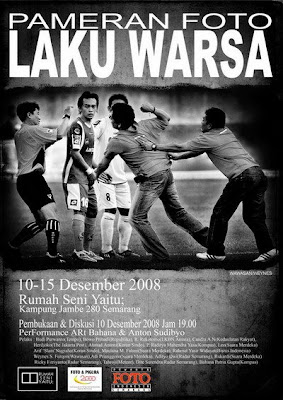 The Indonesian Photojournalist Association of Semarang was declared at April 1, 2003. It was then followed with a photo exhibition titled �Bianglala Kota Lama Semarang� (The Rainbow of Semarang�s Old City) at Sienna Gallery during April 1�6, 2003.

And now the photo exhibition �Laku Warsa� will show at least 40 photos belong to 20 photographers who are working in several local and national medias based in Semarang. Those photos are on topics of socio-politics, art and culture, crimes, environtment issues, and sport.

There is a performance art event by some of the journalists and it will be showed before the opening ceremony. A discussion on the photo show will be held afterward.