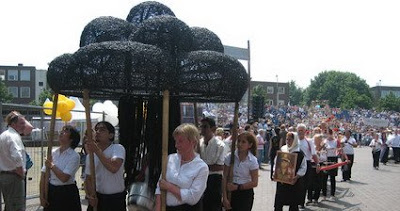 Nindityo Adipurnomo was born in Semarang. He was trained as artist (major in painting) and graduated from The Art Institute of Indonesia, Yogyakarta. He also studied at The State Academy of Fine Arts, Amsterdam, The Netherlands (1986�1987). With his wife Mella Jaarsma, he founded Cemeti Art House (since 1988).

He is going to present the concept of his latest works especially the collaborative one (with Mella) �The Last Animist 2008� showed at International Sculpture Exhibition 2008 �Grandeur� which was exhibited at Sonsbeek Park, Arnhem, The Netherlands, last summer. They were among 28 international artists from around the world who took part in.

The discussion is to show how artist not only relating to his own aesthetic sense and ratio but also embracing public as part of his art works. Nindityo also will tell us how important must artists spread their international networking in the global world.

The discussion is opened for public with no admission. The management of RSY invite young artists, art-workers, journalists, and art lovers to join it.