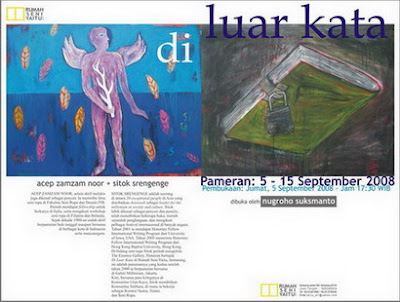 ACEP ZAMZAM NOOR is a trained painter but also known as a poet. He studied visual arts in Faculty of Art and Design of Bandung Institute of Technology. Receiving fellowship for producing artworks in Italy and took part in workshops in the Philipines and Netherlands. From the year of 1980�s Acep had shown many exhibitions, solo or join events, in several cities in Indonesia and abroad.

SITOK SRENGENGE is one of 20 exceptional people in Asia choiced by Asiaweek as a leader for the millenium in society and culture. Sitok is famous as a poet or writer, has published some books, got several awards in literary, and joined with some international literary festival in the world.
In 2001 he received a Honorary Fellow International Writing Programme from University of Iowa, USA. In 2005 he got Honorary Fellow International Writing Programme from Hong Kong Baptist University, Hong Kong.
In visual arts� field Sitok ever ran The Essence Gallery. The join exhibition titled �Outside the Words� at Rumah Seni Yaitu, Semarang, is his second exhibition after the one at Millenium Gallery in 2000.
Now, along with his counterparts in Utan Kayu Community, Sitok founded Salihara Community where he works as literary, theater, and visual arts curator.

A Short History of Why